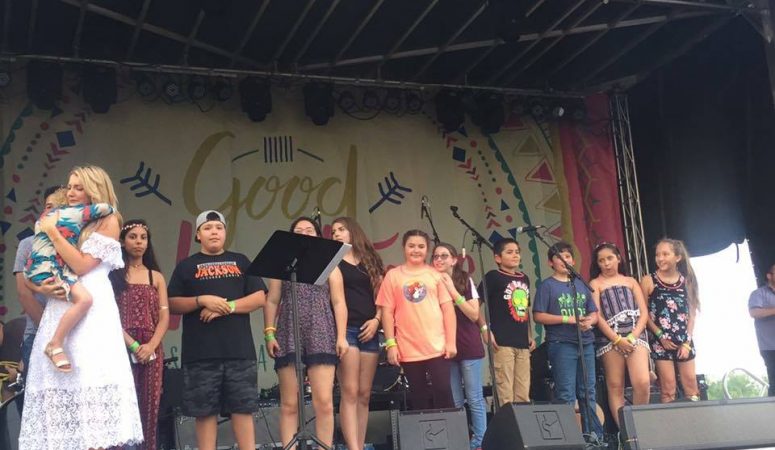 The walls of our Jericho fell down yesterday. The walls fell and we claimed what the Lord already promised to us. He promised us a music festival where the deaf and hearing world would collide. That we would be a part of setting up holy grounds for people to experience a taste of life to the full.

Exactly a year ago, I woke up around 5:30am tossing and turning with heavy anxiety on how this new dream would become reality. It was growing like a fire inside me and the first steps would be daunting. I heard Him say “turn these worries into prayers. For I move then.” I wrote out our 3 presenting sponsors, Cochlear, Ear Institute of Texas and Resound along with many others. I claimed Ben Rector as our headliner.

Little did I know that in September, I would be hopping on airplanes in blind faith for meetings I did not have. That I would begin praying the craziest, most outlandish specific things to see how God would move. No idea that we would be wandering hotels and casinos in Vegas for divine appointments. That 3 days later, I would be flying to San Diego to a series of appointments not on the calendar. These were our first steps into the Jordan River trusting that as soon as our feet hit the water, the river would part for us. “Every place on which the sole of your foot treads, I have given it to you” (Joshua 1:3). That is how God moves.

One evening as we rushed to airport from a rehearsal, we roamed around the parking lot frantically searching. I read Joshua 6 over us, “I’ve already given Jericho to you…” The last morning in San Diego, we received a text message from Ryan with Joshua 6 with a message saying “Before the battle had begun—God had already declared “I have.” Faith isn’t hopeful optimism, it’s assurance that speaks of things in the past as if they have already come to pass.” That is how God moves.

The Aid the Silent team worked the job of 19 people. We encountered a lot of firsts as we threw the first all-accessible deaf music festival. Throughout the day, we would experience extreme joy and debilitating fear. We would have great victories to where there was no doubt God was behind us, and in the next hour experience defeat after defeat that would leave us wondering “is God actually in this?” It was a wave up and down always. I told a friend this experience, he said “that is what keeps you constantly dependent on God. Reminding you that you cannot do this apart from Him.” This is stuff of miracles, raw dependency and broken materials. We strictly needed God to show up but so more so to count on His promises that He already had.

When the forecast said rain and thunderstorms, our hearts went into a panic. Surely He did not bring us this far to let this happen. I woke up yesterday morning to a dark blanket of clouds. He spoke “I Am your covering” and “I alone do mighty miracles.” As I sat on my porch practicing, it started to downpour. I was so crippled in fear, I could not move sobbing as I felt every ounce of me wanting to flee. Then the rain stopped as I reached the Settlement… dark blanket of clouds to my left and clearing skies to my right. I chose the right side of the sky, I was staking claim in His promises… the rain would hold off, He was too good and too trustworthy. My roommate shared that she brought her rain jacket and was reaching for it walking in but stopped herself. “I was in holy anticipation not anticipation for rain.” As I am writing this, it is thundering and pouring. Thank Jesus for rain pouring on the 21st and not the 20th. The rain completely missed Comal County and the unexpected sunshine shined down on us.

I do not have the words to express my gratitude and great thankfulness. I woke up believing it was all a dream. The deaf are normally pushed to the corners and the shadows at concerts but because of amazing technologies and team, they were the guest of honor. It is truly all about them! Our hearing friends were just invited into the journey.

All of my wasted years have been restored to me, He returned every pain in fullness back to me in joy. I was surrounded by my beautiful little deaf friends covered in flower crowns and temporary tattoos. We lit up the already lit dancefloor with subpacs and glow sticks. To dance with them was surreal, to see some of them dancing for the first time was amazing. To watch some of the girls I took to camp go from being insecure to dance because they couldn’t hear the music to going all out with the subpac was amazing. To be handed a tiny 3 year old girl who was deaf and to place her little hands on the subpac to see her eyes come alive was worth it all. To pick up one of our precious ATS kids Harper and hold her for the first time. To watch beautiful interpreting play out on the screen with captioning below. To play music, one of my biggest insecurities, for a massive crowd opening before Penny and Sparrow, Matt Wertz and Ben Rector was unreal. To see hundreds of people dancing and laughing with beautiful sign language flowing throughout was a sign of a very present and dreamy God. Colors, flowers and music are all a part of His big heart. This is the stuff dreams are made of.

My team is anointed for such a time as this… Denise Marcos, Jennie Wojtcazak and Kathy Hagee Rudkin…. to help unify the deaf community and invite the hearing community into something bigger than themselves. These women allow their hearts to be broken as their faith was rocked into deeper waters every day. We became entirely dependent on God as we were driven to our knees. We are not the same anymore.

It was amazing to see the community come alive for this purpose, everyone was on board and all in. We could not have done it without our sponsors, volunteers and additional team members. We are so appreciative. I know I can never begin to thank you to the depth of what you deserve. So many people made what seemed impossible and beyond our wildest dreams, possible.

Peace out Good Vibrations Music & Arts Festival, we are going to keep fighting the good fight for Aid the Silent! You are always welcomed along on the ride. 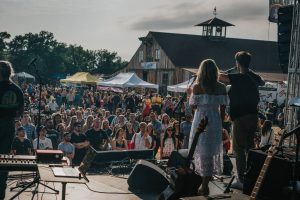